Amazing Monuments not to Miss in Barcelona

Barcelona is a city with 2000 years of history in which you will find a wide variety of monuments and iconic historical places, ​​​​highlighting the city’s Roman, medieval and modern influences. Few big cities can boast of having such original buildings like this one can. Antoni Gaudí, Lluís Domènech i Montaner, Josep Puig i Cadafalch and many other brilliant and more contemporary architects, thanks to their incredible creativity, have given Barcelona a unique charm.

If you are thinking of coming to visit Barcelona, ​​do not hesitate to admire them during your stay in the Catalan capital. This city is full of history and it is impossible to see all the monuments in one day. 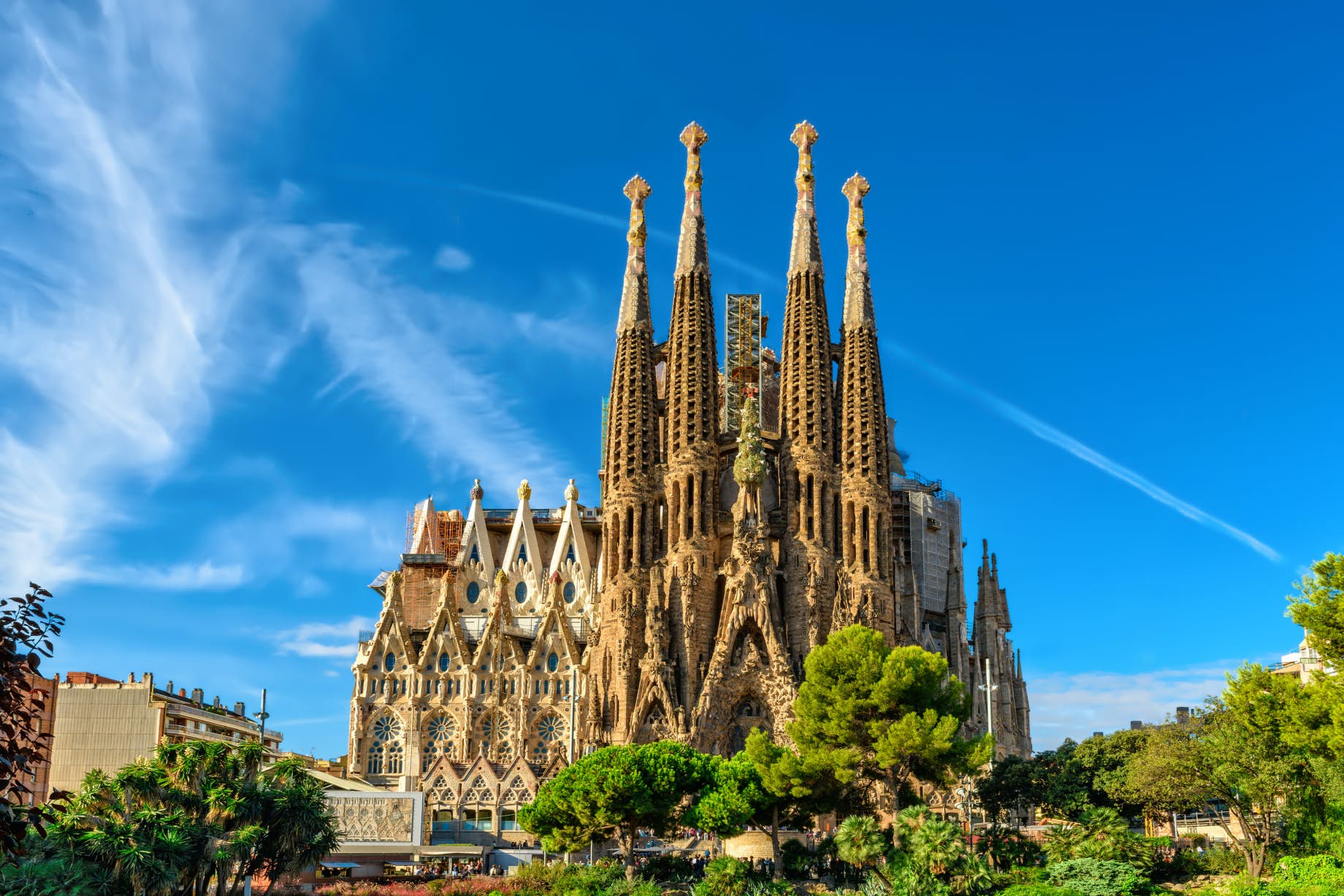 Gaudí’s masterpiece is one of the most photographed monuments in the world. In fact, the Sagrada Familia offers magnificent decorations, both outside and inside. And if you want to immortalize the basilica in its entirety, Gaudí Square is the perfect place. Probably Barcelona’s most famous historical monument and symbol of the city, along with Gaudí’s unfinished masterpiece, begun in 1882, still under construction and forecast to be completed in 2026, coinciding with the date of the centenary of Gaudí’s death.

La Sagrada Familia is a reflection of Gaudí’s artistic fullness: he worked there for most of his professional career but especially in the last years of his career, where he reached the height of his naturalistic style. If you want to visit this historical complex in Barcelona, ​​​​you must buy tickets in advance because access and opening hours of the Sagrada Familia are limited. If you come to Barcelona, ​​you can’t miss the opportunity to see it with your own eyes.

Parc Güell, which we also owe to Gaudí, offers a multitude of splendid settings. Some of the most popular sites include the Dragon Staircase, the ceiling of the Sala Hipòstila, and the Mirador Virolai, also called Mirador Joan Sales, which gives access to an impressive panorama of Barcelona. Born from the collaboration between Gaudí and Eusebi Güell, Parc Güell is a garden city project from the beginning of the 20th century that was abandoned due to lack of interest from wealthy Catalan families who preferred to maintain their residence in the center of Barcelona.

In 1922 the park was purchased by the city and turned into a public garden. It is a UNESCO World Heritage Site. Inside there is a house-museum where you can learn more about the park. Today it is possible to visit a large part of the park for free, but the part that contains all the monuments of interest such as the salamander or the wavy benches need a ticket for tourists. One of the stairs in the main square of the park has an amazing snake shape. If you buy tickets online, you can choose the time of visit and it’s cheaper off-peak!

On one of the main streets in Barcelona which is Passeig de Gràcia. This street, similar to Las Ramblas, is full of shops, restaurants and small businesses. It is very important that you come here because you cannot miss the two most important houses in Barcelona: Casa Batlló and Casa Milà – La Pedrera. They absolutely deserve to be seen. Today you can visit them inside, since they are also museums.

This famous modernist building is another of Barcelona’s historical sites, built between 1906 and 1910 by the famous architect Antonio Gaudí, La Pedrera or Casa Milá. The building’s part of the architect’s naturalist period inspired by the forms organic waves of the sea. And with more than a million visitors a year we can say that it is one of the 10 most important monuments in Barcelona.

The historical monument is also the work of Antonio Gaudí, it is located very close to La Pedrera. La Casa Batlló is one of those buildings that attract all eyes, its organic shapes and colors make you move in a fairy tale, inspired by the legend of Sant Jordi, a popular festival of Catalonia, the building represents a dragon and the knight with his lance from which a rose will be born, thus Casa Batlló always dresses its façade with roses during the festivals of Sant Jordi 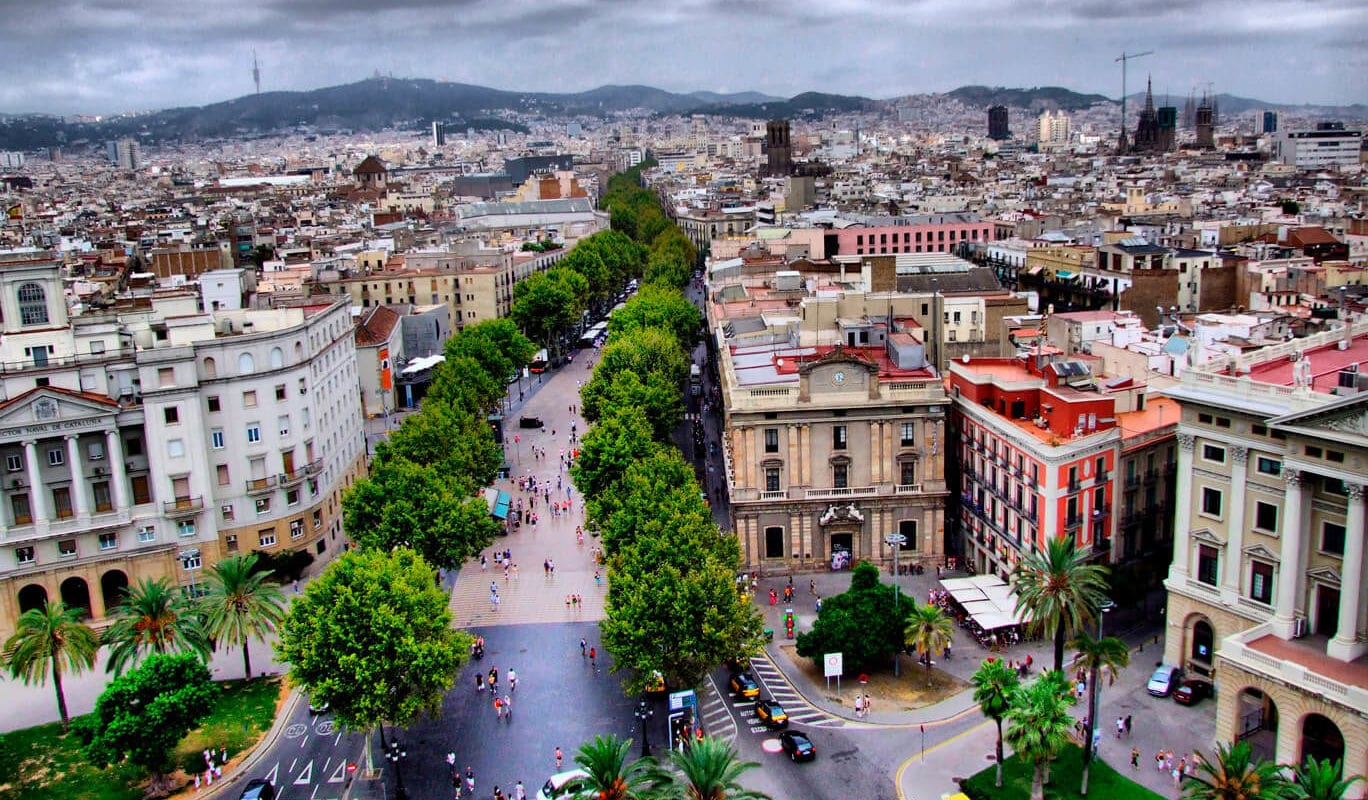 Las Ramblas is the main street you will find in Barcelona. Not crossing it is impossible if you come to Barcelona! This street is perfect for shopping. It’s always full of people and street performers. Among the must-see places in Las Ramblas is La Boquería Market! This street starts at the Columbus monument, next to the beach and continues to Plaza Catalunya. In this square, you will see beautiful fountains and huge department stores. 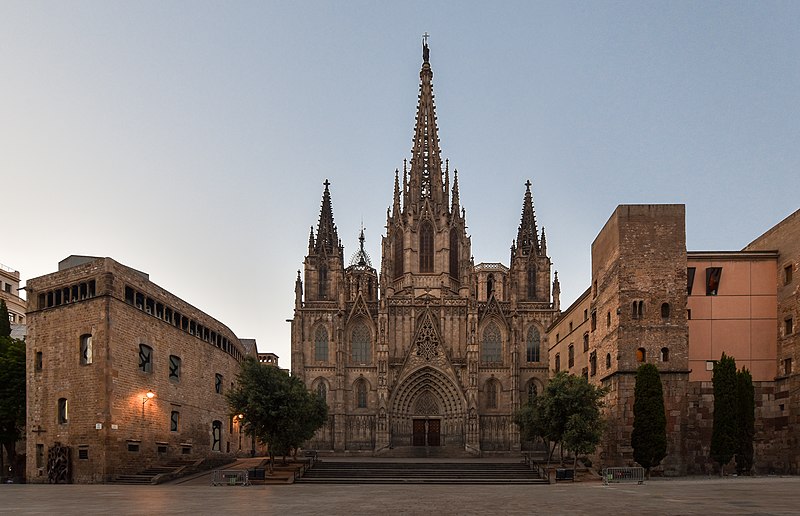 It all started in Medieval Barcelona and its popular Gothic Quarter where the Barcelona Cathedral is located, also called the Cathedral of the Holy Cross and Saint Eulalia, which is the patron saint of the city. It was built in the 13th and 15th centuries on top of the old cathedral Romanesque – built in turn on a Visigothic church whose remains can be seen in the Barcelona History Museum.

One of the highlights of the cathedral is its cloister, which is a departure from the typical quiet and meditative cloister we are used to. Inside you can find beautiful gardens and ponds as well as a fountain dating from the mid-15th century, where the traditional, ou com balla (the dancing egg), takes place on the occasion of the Corpus Christi festival. We must also point out the 13 geese that are always in the garden. According to a legend from Roman times, little Eulalia was sentenced for refusing to renounce the Christian faith and was sentenced to 13 years of martyrdom. 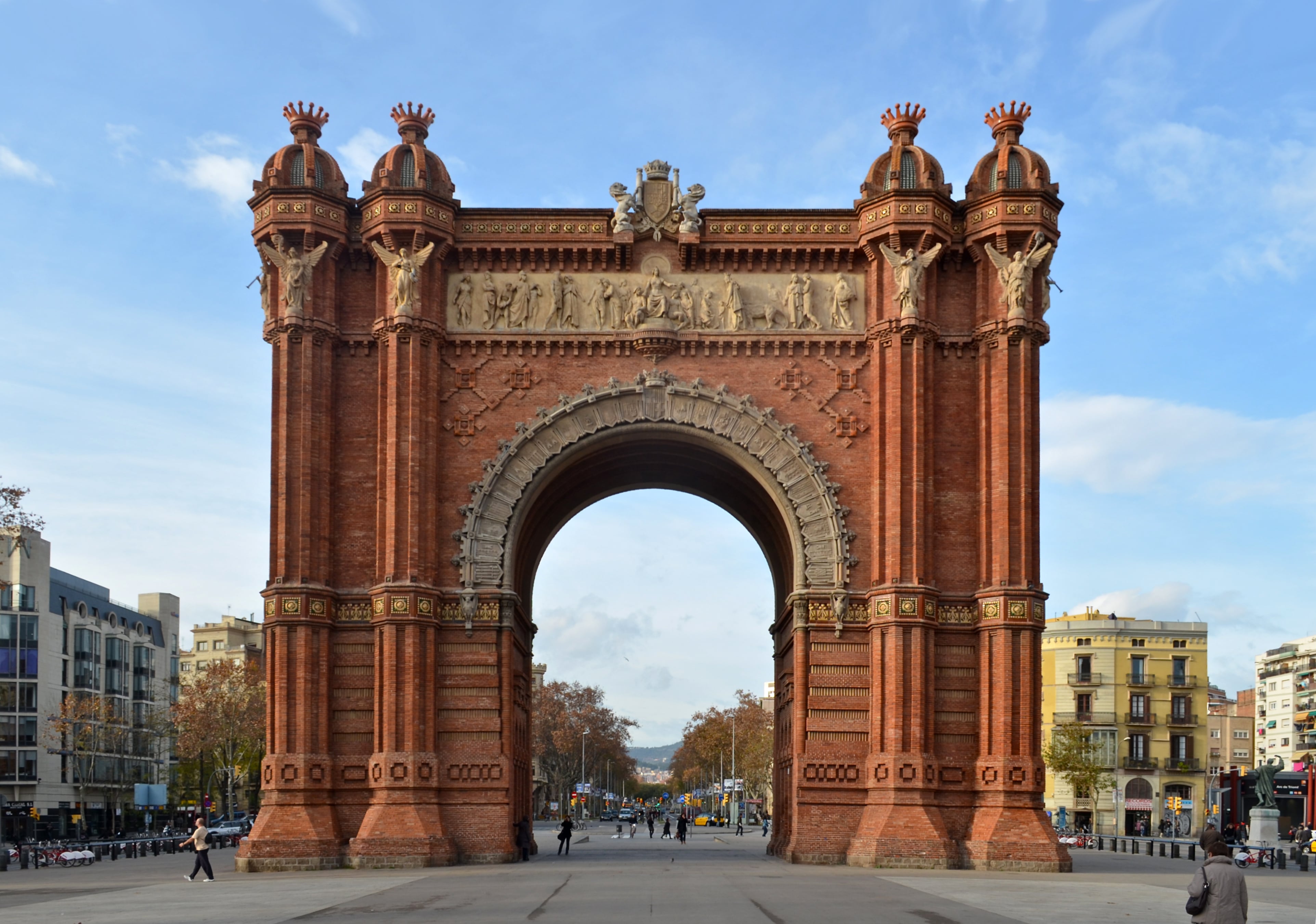 The Arc de Triomf is a monument located at the joining of Paseo de Lluís Companys, Paseo de San Juan and Ronda de San Pedro, in the city of Barcelona. It was designed by the architect Josep Vilaseca as the main entrance to the Barcelona EXPO in 1888. The sculptural decoration was carried out by Josep Reynés, Josep Llimona, Antoni Vilanova, Torquat Tasso, Manuel Fuxà and Pere Carbonell.

Unlike other triumphal arches of a markedly military nature, Barcelona’s Arc de Triomphe has a greater civil component, characterized by artistic, scientific and economic progress. The Arc de Triomf has been used on occasion as the finish line for some of the most important popular foot races in Barcelona, ​​such as the Jean Bouin or the Barcelona Marathon. It has also been used as a backdrop for festivals and musical events such as Primavera Sound.

If you come to visit Barcelona, ​​​​you should know that the Montjuïc area is the ideal place for a green walk with unbeatable views of the city and the open sea. However, it is a bit difficult to get there, which has the advantage of being less crowded with tourists. But don’t let that throw you off! The best thing to do is to take the cable car from Montjuic, and take a walk through the park. Along with the natural environment and the spectacular views, you will find buildings from the 1992 Olympic Games, such as the Palau Sant Jordi or the telecommunications tower designed by Santiago Calatrava. If you feel up to make it to the top of the hill, you can see the Olympic Stadium and the Jardi Botànic. Plaza Espanya, at the foot of Montjuïc, is the most common access to the mountain, and where you can also visit the Pavelló Mies van der Rohe and the CaixaForum cultural center.

People often come here to run and enjoy the beautiful view! Apart from nature, you can visit the castle of Montjuïc. To get to the castle, you will need to take the cable car or the bus. In addition to the castle, you can visit the National Art Museum of Catalonia, the Olympic Stadium and the Montjuïc Fountain, which is one of the most sparkling places in Barcelona. With its colored lights, water features, and accompanying music, there is something truly magical about this early 20th century fountain. To photograph it, it is best to wait just after sunset, when the sky turns dark blue.

Built between 1905 and 1908 by Domènech i Montaner, the Palace of Catalan Music is an Art Nouveau jewel that was even declared a World Heritage Site by UNESCO in 1997. Its colorful stained glass windows, wonderful dome and sumptuous interior are unique in the world and definitely worth admiring during the day.

With its gilded galleries, stained glass windows and rich ornamentation, the Palau de la Música Catalana concert hall is a delightful place to photograph. The building has an absolutely splendid façade but it’s hard to find the right angle due to the narrowness of the street.

Enjoy these amazing locations, some of which you can glide through on our Gaudi eBike Tour and learn some more in-depth history about them. 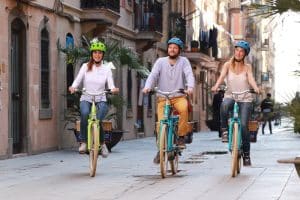 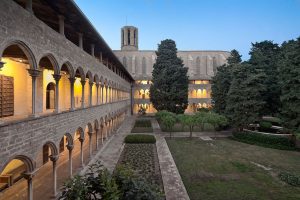 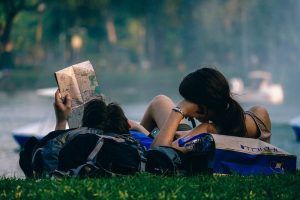 Travel Barcelona on a budget: best ways to enjoy the city