Whenever we see a movie, we usually wonder at the end. “Where was it filmed?”. Plus, there are places in the world, far away from us, that we feel like we know thanks to the movies. There are cities like Prague, Casablanca or San Francisco, that have been “placed on the worldwide map” thanks to the cinema. The city of Barcelona is a good example.

There are many directors who have chosen the capital of Catalonia as a place to shoot their films. Almodóvar, Woody Allen or the Oscar-winning director Alejandro Iñarritu chose the Mediterranean city as the stage for their stories. Why? Barcelona is a city full of life. A city that offers art, architecture and unique views that can enhance any story. Not to mention the weather conditions that so many headaches give to directors and producers in outdoor shootings.

Today we bring you some fun facts about what makes Barcelona one of the best cities in the world to film a movie. Keep reading and discover some of the popular movie and film locations in Barcelona you can visit in your next trip to the Catalan capital.

Woody Allen is a well-known Spain-lover, and that´s why he did not miss the opportunity to shoot in Barcelona after receiving a proposal from the Barcelona Town Hall. The famous director wrote and filmed the movie “Vicky Cristina Barcelona”, a story about two American tourists travelling through the Mediterranean city, starring by Penélope Cruz, Javier Bardem and Scarlett Johansson.

The director filmed scenes on some of the most emblematic points of Barcelona, such as Gaudí’s La Sagrada Familia, the Tibidabo Park, Parc Güell, La Pedrera, La Plaza Felip Neri or Las Ramblas. Woody Allen showed in his movie a Barcelona full of light, color and very opened to the world, but also with character, personality and all those things that make it unique in the world. The clash between worlds (the USA and Spain) is well represented by the relationship between Vicky and Juan Antonio.

Fun fact: the director, after seeing the Sagrada Familia, remarked how similar he and Gaudí were since both “defy conventionalism”.

Biutiful, the other face of Barcelona

Barcelona has as many faces as directors want to shoot there. Alejandro Iñarritu, winner of two Oscars, decided to show a “darker” side of Barcelona with his movie “Biutiful”. Santa Coloma and Badalona gave the Mexican director the opportunity of offering a closer view of the humblest neighborhoods of the city, the ones that never appear in the postcards. Javier Bardem plays a hustler, a man with a tragic background and a dysfunctional family that earns from the work of others.

One of the highlights of the movie is the chase scene that takes place in the middle of Las Ramblas. For shooting this scene, the team cut Las Ramblas during several days, causing a lot of distress since it is one of the main arteries of Barcelona. It’s a good movie that we recommend you watch, especially if you come to Barcelona, since it will help you to see the real city and feel the lives of some of its most unprivileged citizens.

Fun fact: Iñárritu decided to put his story in Barcelona because he wanted to show the unknown Barcelona, the vibrant and diverse immigrant society he found there and, of course, their “delicious food”.

A shattered Barcelona in The Last Days

“Los últimos días” (The Last Days) is a film directed by José Coronado, one of the most recognizable faces in Spanish cinema. The film takes us to Barcelona during a mysterious plague that kills most of the inhabitants of the city. Their protagonist can´t go out to the street because there is something that kills you the moment you set a foot on the outside. From that moment they must fight animals, the mysterious plague and other humans that have turned into savages.

One of the most famous scenes of the film takes place in Via Laietana, when (SPOILER ALERT) the main protagonist must cross the street barefoot trying not to die. For the shooting they temporarily cut important Barcelona streets like Carrer de Balmes or Pau Claris. During the film we can see destroyed images of the Agbar Tower, the Arc de Triomf or the La Catedral del Mar. Luckily, all those images were CGI.

Fun fact: They spent more than 5 million euros to recreate a post-apocalyptic Barcelona, and they did a great job!

“L’Auberge Espagnole”, translated as “Una Casa de Locos” in the Spanish edition, is the work of the French director Cédric Klapisch. It is the movie you MUST watch if you are travelling to Barcelona, especially if you are coming to study as an Erasmus or you are going to live there for some time. It’s one of the best portraits of the life of a foreign student in Barcelona ever done.

The movies start with the arrival of a young French student that starts living in a flat in the gothic area with other foreign youngsters. From that point it’s all idiom, cultural and love misunderstandings among them, especially with the local people and their strange habits. The movie takes place mainly in Plaça Catalunya, La Rambla, the Raval and the Gothic district, without forgetting the Barceloneta Beach and La Sagrada Familia.

Fun fact: Audrey Tautou plays a part that makes her totally unrecognizable for all those who remember her as the sweet Amelié.

In 1995, the Spanish filmmaker Vicente Aranda chose Barcelona and Vic as the stage for his Spanish Civil War movie. The film, starred by Ana Belén, Loles León and Ariadna Gil, tells the story of some of the woman that took part on the leftist republican army during the war. The same theme was told by Ken Loach in his movie “Tierra y Libertad”, which also has several scenes that take place in Barcelona, in locations such as La Plaza Real or Vic Town Hall Square.

Fun fact: The scene where the republican soldiers march to the Aragon war front was shot in Plaça Reial and took more than 500 extras. 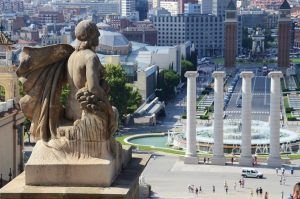 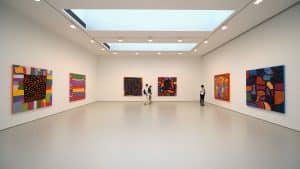 The Best Art Galleries & Exhibitions to Visit in Barcelona 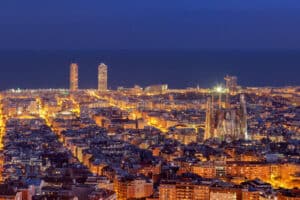 Amazing Monuments not to Miss in Barcelona