The Arc de Triomf in Barcelona, a City Icon

Discover the Arc de Triomf in Barcelona, a City Icon

Barcelona is a city full of symbols and monuments that make up a unique and always recognizable skyline. The Arc de Triomf is one of them. It will surprise you with its size, its architecture and its beauty.

Today we want to tell you something more about its history and about everything that hides this monument located at the intersection between the Paseo de Lluís Companys, the Paseo de San Juan and the Ronda de San Pedro. Discover the Arc de Triomf in Barcelona and its secrets.

History of the Arc de Triomf in Barcelona

The Arc de Triomf of Barcelona was built as the gateway to the Universal Exhibition that was held in the city in 1888. In that year, it became a majestic way of presiding over the current Paseo de Lluís Companys, which led to the enclosure ferial that was located in the Park de la Ciutadella.

At the end of the 19th century, universal exhibitions became events with high social prestige, since the city that hosted them became known worldwide from different points of view: artistic, economic, industrial and scientific.

For all this, the Arc de Triomf was also erected as a symbolic entrance to modern Barcelona, an allegory of its growth and development.

The Arc de Triomf in Barcelona is a monument of 30 meters high, neomudéjar style and red brick in which you can see the eclecticism typical of Catalan modernism, which was so fashionable at that time.

In general, the triumphal arches are raised to honor a military victory but, in the case, the Arc the Triomf of Barcelona it is a complete civil construction that represents the progress of the city.

It was restored in 1990, and today it becomes the goal of some of the most important races that take place in the Catalan capital, as, for example, the Barcelona marathon. And it is also the scene of musical and cultural events.

What you can see in the Arc de Triomf in Barcelona

The architect Josep Vilaseca designed a monument with classic proportions and with a very striking decoration, full of beauty and with a symbolic essence. Barcelona and its opening towards the outside and towards the modern world has a particular role in it.

On the side that overlooks the Paseo de Sant Joan, you can observe the work of Josep Reynés in which the city is seen receiving the different nations, a relief that has the title “Adhesion of the Nations to the Universal Contest”.

In the center, you can see a female figure representing Barcelona (she has the city’s shield on her chest). On one side you will find the goddess of the Earth, Cybele, followed by other figures with a specific mythological aspect. On the other side, you can see the goddess Athena with a shield on which are engraved the letters P, of progress, and F, of happiness, also flanked by other female figures.

This set is presided over by the Spanish Monarchy Shield, with the royal crown and the Golden Fleece necklace, with two lions on each side.

In the frieze that looks towards the Paseo de Lluís Companys, you can find the presentation of prizes and awards to the participants of the Exposition, a work by Josep Llimona entitled “The Reward”. In the center, again, the representation of Barcelona with a female figure accompanied by others from different ethnic groups.

There is no shortage of sculptures on the sides. In one of them, you can observe the allegories of Industry, Agriculture and Commerce (sculptures by Antoni Vilanova).

In the center, you will find Athena with an olive branch and a cluster of grapes; It is also said if it could be the goddess Ceres, Roman goddess of agriculture. It is surrounded by more figures that carry Earth products and the god Mercury, on their left, in the representation of commerce. You can notice the industry in a gear wheel that one of the figures is carrying.

In the other, there are the Arts and Sciences (by Torquat Tasso). The figure of Apollo presides over this relief; He points out the Arts with his left hand and holds with the right a flame that alludes to science, which translates into progress. Also included are the muses of music and dance Euterpe and Terpsichore, among other allegorical sculptures.

The famas of the buttresses of the Arc de Triomf

The winged sculptures located in the buttresses are called famas and were sculpted by Manuel Fuxà and Pere Carbonell. In total, 12 famas were created and those are located in the eight towers of the corners, which are crowned with crowns. They embody the self-esteem that Catalonia recovers and its introduction among other nations, another symbol of the progress that the construction of this arch wants to show.

Finally, in the curve of the arch, it is possible to contemplate the shield of Barcelona, surrounded by the shields of the other Spanish provinces, 24 shields in each one of the faces of this impressive monument.

Undoubtedly, the Arc de Triomf in Barcelona is one of the most representative icons of the city. A monument full of history that you will surely love to photograph in your visit to the city.

Our office is near the Arc de Triomf in Barcelona, so do not miss the opportunity and come and meet us! 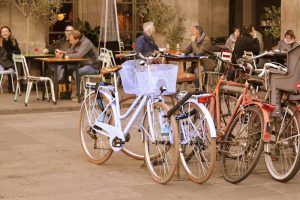 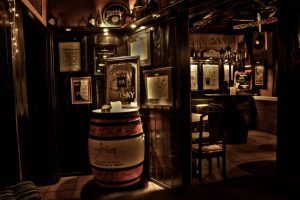 The Top British Restaurants in Barcelona